On July 29 I started a last minute trip through the Kioshkokwi Access point in Algonquin Park. I had a 6 days off work so I figured what better way to spend my time off! The plan for this trip was to visit some lakes that I had yet to see, and with the weather forecast looking almost too good to be true, I decided to take on some big water which I don’t normally like to do when I trip solo. My last minute decision would have me travelling from Kiosk into Manitou Lake, then down to Three Mile Lake (via the 3km portage) and then over to Maple and down to Erables for a night.. from here I would head down Maple Creek back to the Access point on the far side of Kiosk Lake. The only lakes on this route I have previously paddled were Kiosk and Maple.

On Saturday morning I got a later start than I normally like too, I didn’t have my permit in hand until shortly after 8am. Luckily it was a beautiful morning and the notorious winds of Kiosk Lake were a non-issue. I made quick work of loading my canoe and setting off across the still waters of Kioshkokwi Lake.

Time to get going! After a little swim of course.

For this trip I had borrowed a canoe from work (Algonquin Basecamp) but after trying it out a couple of times I realized it wasn’t the right fit for tripping with my K-9 companion. The canoe is a Souris River Tranquility which is a great solo tripping boat, but unfortunately it just isn’t wide enough to comfortably fit a 75+ LB dog and gear for 4 days. As a result I ended up using my 17ft Swift Prospector which obviously has plenty of room to spare. I did decide to bring along the double blade paddle that I took with the solo boat just because I was curious how well it would perform in the big boat. I used it for the entire trip across Kiosk Lake, and realized that it was a big mistake. The paddle was simply too short to paddle such a wide canoe and as a result it was very awkward to reach the water with. Not only that but I ended up with lots of water in the canoe, assuming because I had to use the paddle at such a steep angle to reach the water, it was dripping water on me with every stroke!

It took me close to an hour to cross Kiosk Lake, and I passed many occupied campsites along the way. As soon as I passed the Junior Ranger Camp on ‘Sandy Point’ all of the noises from motor boats and fellow campers were behind me. All I could hear now was the rushing water of the Amable Du Fond River, which I would soon be paddling for a few kilometers before reaching the final portage of the day into Manitou Lake.

The first portage of the day (on the left) going across this small waterfall.

The first portage of the trip was only a 265m trail around a small waterfall. This portage is very straight forward and crosses a logging road near the beginning. In low water there is the option to stay on trail and meet up with the next portage just down river, which would add 440m to the trail. Because it basically hasn’t stopped raining all summer thus far, taking the water route was no big deal, as a matter of fact the water is still so high I couldn’t imagine ever needing to use the low water route. 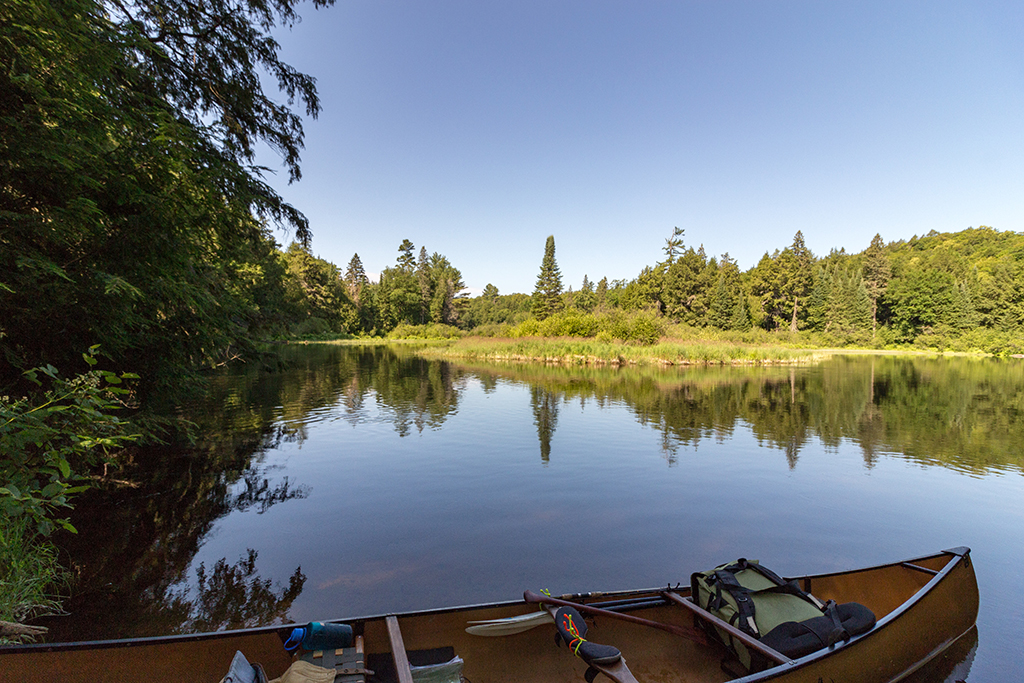 Back on the Amable Du Fond River after the 265m portage. This section of river can be bypassed by an additional 440m portage, but it was unnecessary – Note the double blade paddle lashed in my canoe, that’s where it stayed for the rest of the trip!

A few minutes later I approached the next portage which is a another short one, only 310m. This one goes around a very large waterfall that I wish I took the time to explore… because it is fairly close to the Access point I’m sure I will be back soon. Unfortunately I didn’t even get any good photos of this one. All I remember about the portage is it was a pretty steep climb, which was obvious considering the size of the waterfalls and I was going against the current, but it only took me around 10 minutes to single carry.

Shortly after getting back on the river I approached a small swift that I thought I might have to line the canoe through… but I managed to power through it using my single blade paddle. If the water was slightly higher I don’t think I would have made it. Right after the small swift the river opens up and almost turns into a long, skinny lake with not much of a noticeable current. There are three campsites along this stretch, the first one being on river right. As I passed the first campsite I noticed the yellow portage sign for the 1355m into Manitou Lake. The campsite on river left looked quite nice, probably the nicest of the 3 by far. 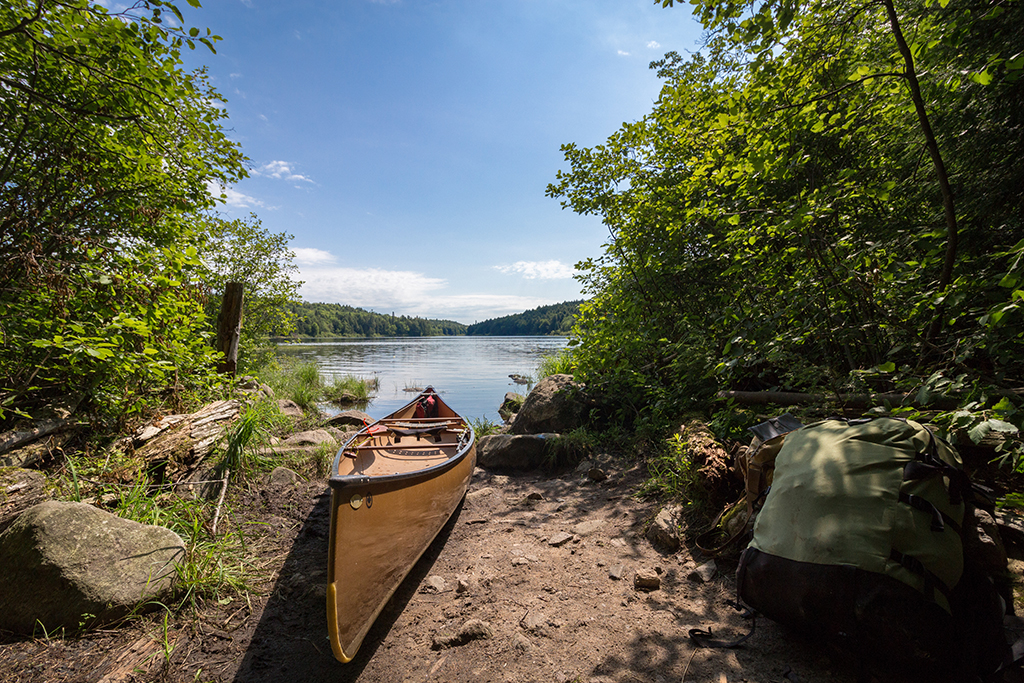 The start of the 1355m portage into Manitou Lake

I single carried approximately half of this portage, the first half was relatively flat and easy going, but when I approached a steep incline I decided to put the canoe down and double carry from there. This turned out to be a good idea because it was quite a large hill, but after reaching the top the trail was very easy the rest of the way to Manitou Lake. When I finally reached the lake I was greeted by a huge beach, which is known to be one of the nicest in the entire park! I can see why! I quickly set my pack down on the beach and went back for the canoe.

When I got back to Manitou I could hear what sounded like a motor boat, then a moment later I could see it going across the lake. It pulled up to shore just North-West of the beach, so after checking my map I realized there was a cottage there. What a way to spend a summer! I took a few moments to explore the beach and the nearby campsite (which wasn’t all that inviting). My dog Athena decided to lay down in the lake for awhile to cool down, it was around 30 degrees and there wasn’t a cloud in the sky, after all. It’s days like this that I wish I knew how to swim!

Athena cooling off on the Manitou Lake beach

The beautiful beach at the end of the 1355m portage into Manitou Lake. The beach extends about the same distance in the other direction as well.

Because I was done portaging for the day I took my boots off and played in the water with Athena for a few minutes, then got on the water. I passed by a few other solo canoeists on my way across the very large lake. 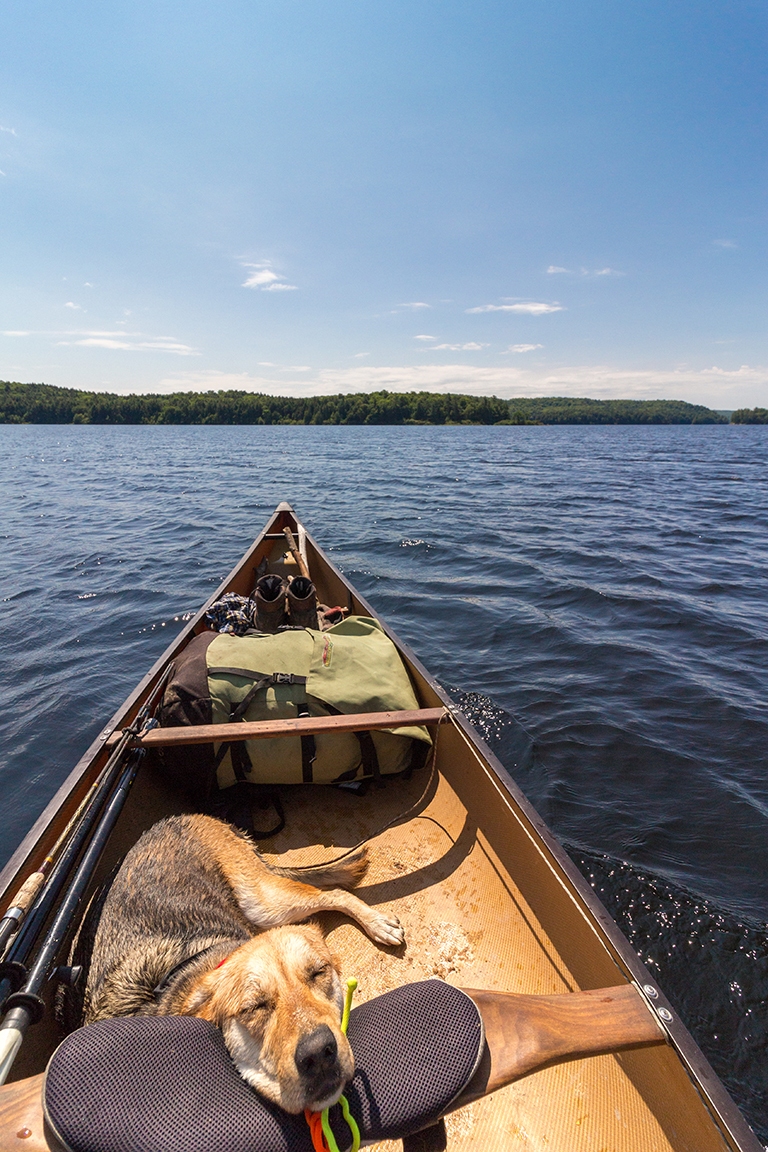 My first stop was the campsites on Pine Island. I wasn’t very impressed with either of these sites, same goes for the sites on the island just North of this one. I decided to keep going for since I’d be heading to the other side of the lake the next morning anyways. As I got back out into the middle of the lake I noticed the very small island with a single campsite, it looked like a great spot so that’s the direction I headed. As I got closer I realized it was occupied by another solo canoeist that I had seen earlier on in the morning. I think he started his trip an hour or so ahead of me. I kept going and ended up at the South-Western campsite on the next island that has 3 sites total. It was a beauty campsite! This would be my home for the night. 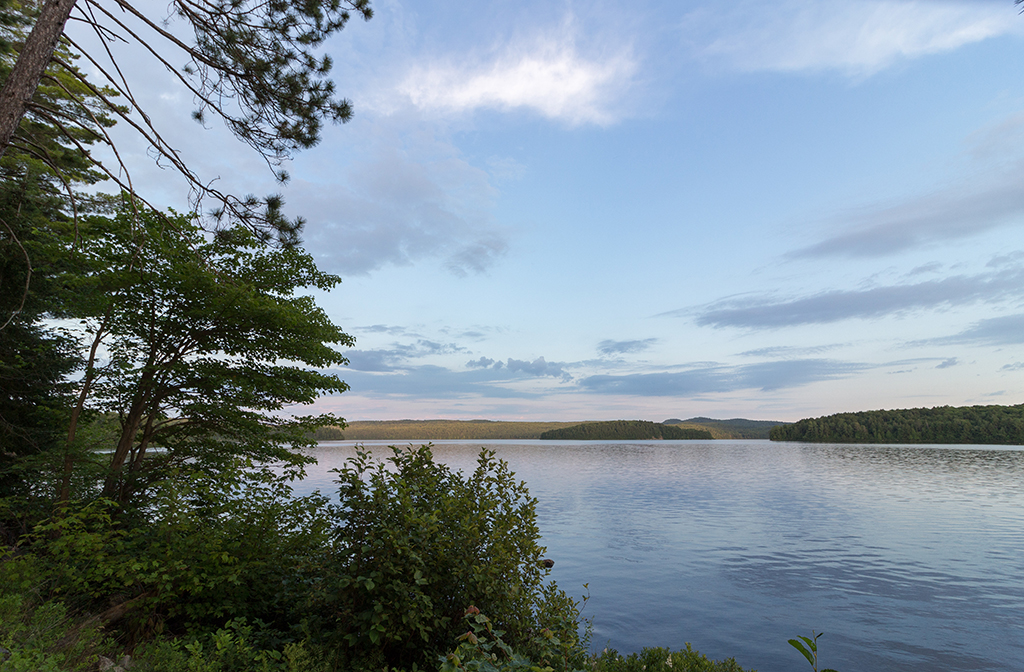 The Southern view from my beautiful island campsite on Manitou Lake

As I lazed around camp for the entire afternoon I noticed how scenic this lake was. I was surrounded by mountains off in the distance. I bet this would be an amazing sight in the fall when the leaves start changing color as most of the canopy was dominated by hardwoods. Supper tonight was a grilled striploin steak with a Lipton SideKick. Nothing better than a fresh steak grilled over the fire! I capped the evening off with a small cup of whiskey while watching the sunset, which became a routine on this trip.

A beautiful evening on Manitou Lake

Originally I had planned to sleep in my tent without the fly tonight because when I checked the weather before my trip there was a 0% chance of rain overnight, but I decided I better put it on just in case because the sky started to look rather ominous just before sunset.  Oh well, maybe tomorrow night? 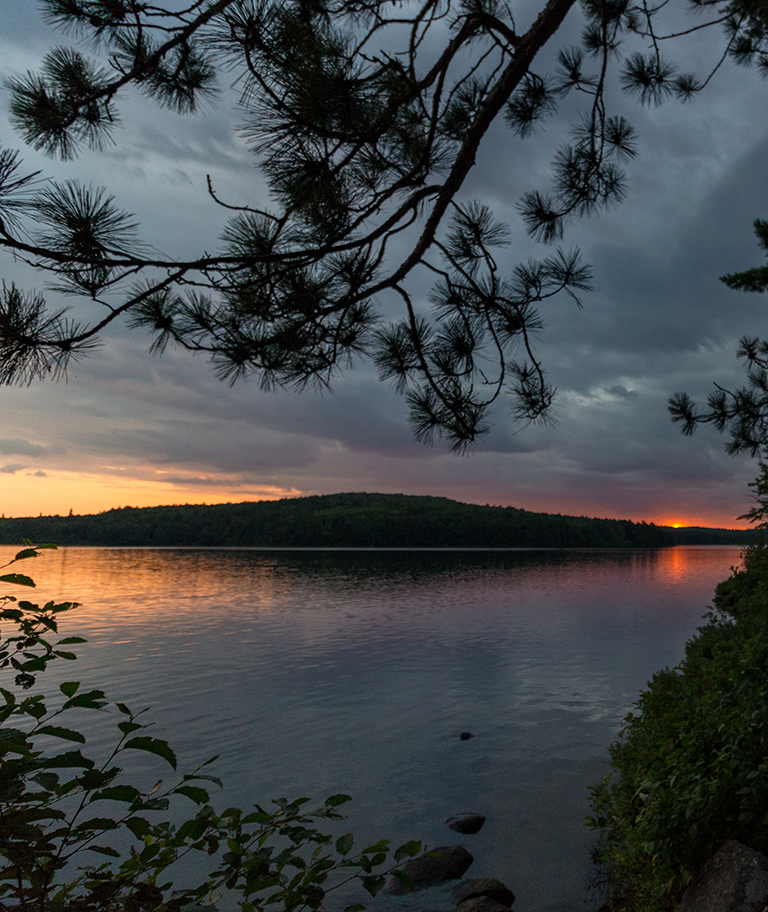 As soon as the ‘golden hour’ came to an end I decided to call it a day and head for the tent, where Athena was already fast asleep. Usually she more or less begs me to let her in the tent around 8 every evening, I guess because she’s still so young she requires a little extra sleep. It never did rain overnight, I wish I never did put the fly on my tent because it was a very warm and humid night, a little too warm in my small tent, a little extra circulation would have went a long way! I had set an alarm for 5am the next morning because I knew I had a very long day ahead…