When my alarm sounded at 5am ‘excited’ wouldn’t be the best word to describe my feelings for getting up. I had a good sleep, but for some reason I was still very drowsy. I tossed and turned for 30 minutes while thinking about the long day I had ahead of me. I finally decided to retire from the tent somewhere around 5:45. The first thing I noticed when I unzipped the fly of my tent was the beautiful sky over the vast, calm waters of Manitou Lake.

I follow the same routine every morning while I camp. First I grab my food bag which I always hang from a limb a good ways away from camp, I then collect water for coffee and oatmeal for breakfast. While my water comes to a boil I pack up everything inside my tent (clothes, sleeping bad, etc.) I then make my coffee, and while it cools down I take down my tent. This gives me some relax time to enjoy my coffee, which is my favorite part of every morning! As soon as I finish drinking my coffee I make 3 packets of instant oatmeal, then while that cools I get my pack ready for the day, so as soon as I’m done eating I can give my cup a quick rinse, pack it up, and off I go! This whole process from the time I wake up to the time I get on the water usually takes around 45 minutes, or closer to an hour if I have a short day.

It was approaching 7am as I took my first paddle strokes of the day. I knew I had one of my longest ever days ahead of me, but I still wasn’t in much of a rush. I find it very difficult to rush on a beautiful morning like this; and besides I wasn’t very excited to do the 3km portage into Three Mile Lake anyways. 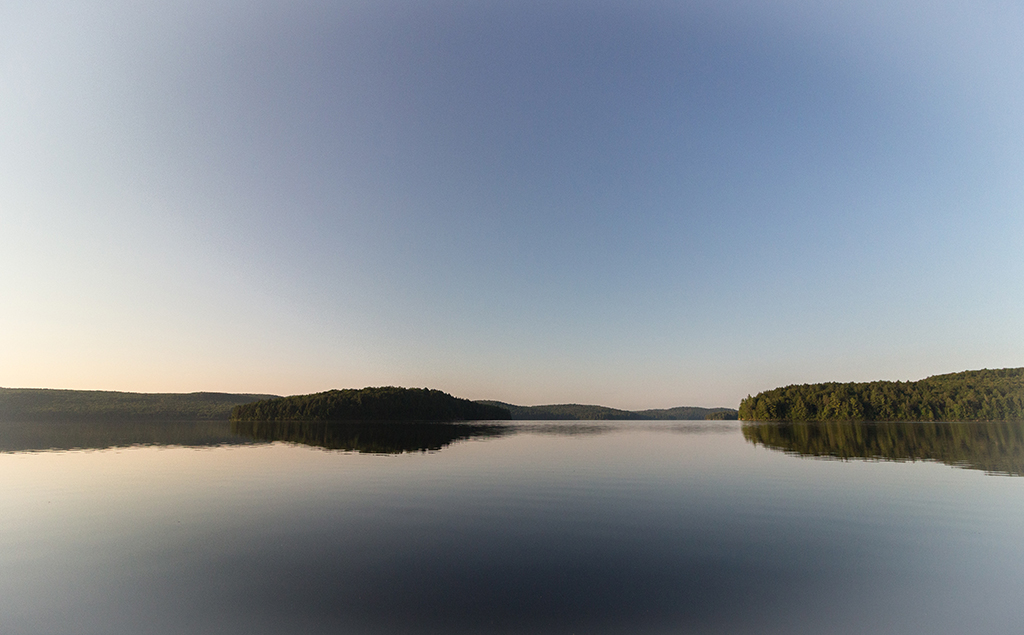 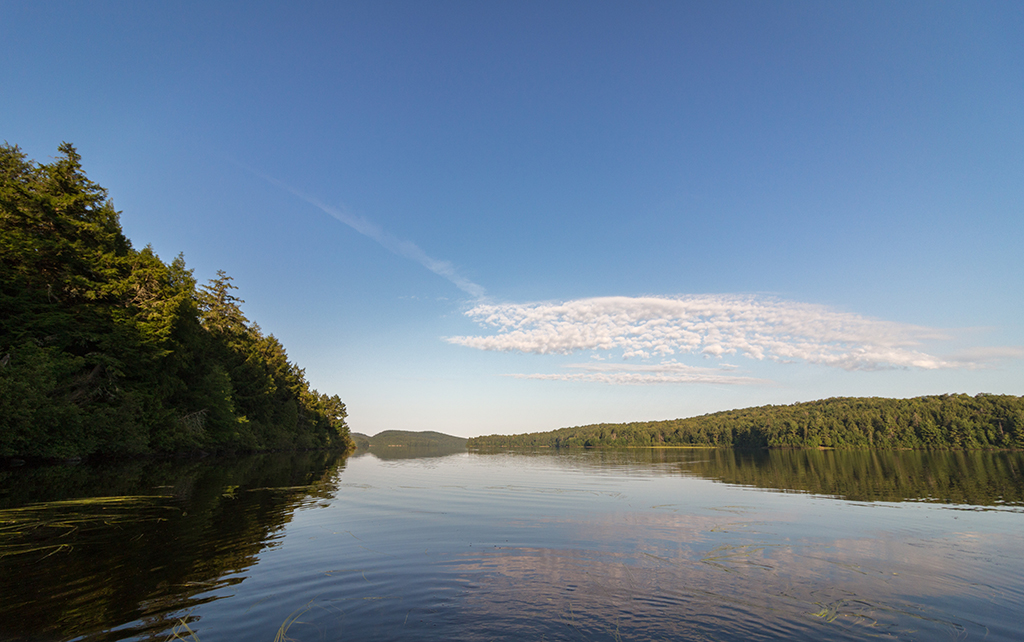 I didn’t know what to expect on this portage. I only really knew two things about it.. It’s the second longest portage I’ve ever done and it gains just over 60m in elevation in the first kilometer of trail! How bad could it be?!

I lashed my paddle in the canoe, threw my pack on my back, threw my canoe on my shoulders and off I went. The portage didn’t look too intimidating from the landing, but about 100 meters in the gain in elevation started. I tried not to look up the massive hill in front of me as I struggled to climb over the many rocks and roots. Finally I had enough, after only a few minutes of single carrying I couldn’t do it any more. I threw the canoe to the ground and decided I would take two trips up this mountain. When I looked back after dropping the canoe I noticed I could still see Manitou Lake, which wasn’t very encouraging at all.

When I reached the top of the mountain I dropped my pack and went back for the canoe.. it was much more manageable this way, and I’m glad I made the decision to double carry. After getting the canoe to the top I took a little break, sitting down on a freshly fallen tree. From here the trail was very easy and straight forward, I powered through the rest of it with both my pack and canoe on my back, taking only one single break at a canoe rest along the way. Close to half of the trail follows an old logging road, making for easy travel. In total it took me just over an hour to complete, which I was pretty happy with.

Three Mile lake was quite inviting, like Manitou it is a very large lake but the water was as smooth as glass. About 5 minutes into my paddle I crossed paths with yet another solo canoeist. We weren’t close enough to exchange greetings, but I couldn’t help but notice he was trolling as he slowly made his way down the lake. Just after passing by him I heard some splashing, and when I looked over I noticed he had caught a fish (probably a lake trout). I immediately put my line in the water and trolled the rest of the way to the portage into North Sylvia Lake, but unfortunately I wasn’t as lucky. This would be the last time using my fishing rod on this trip. 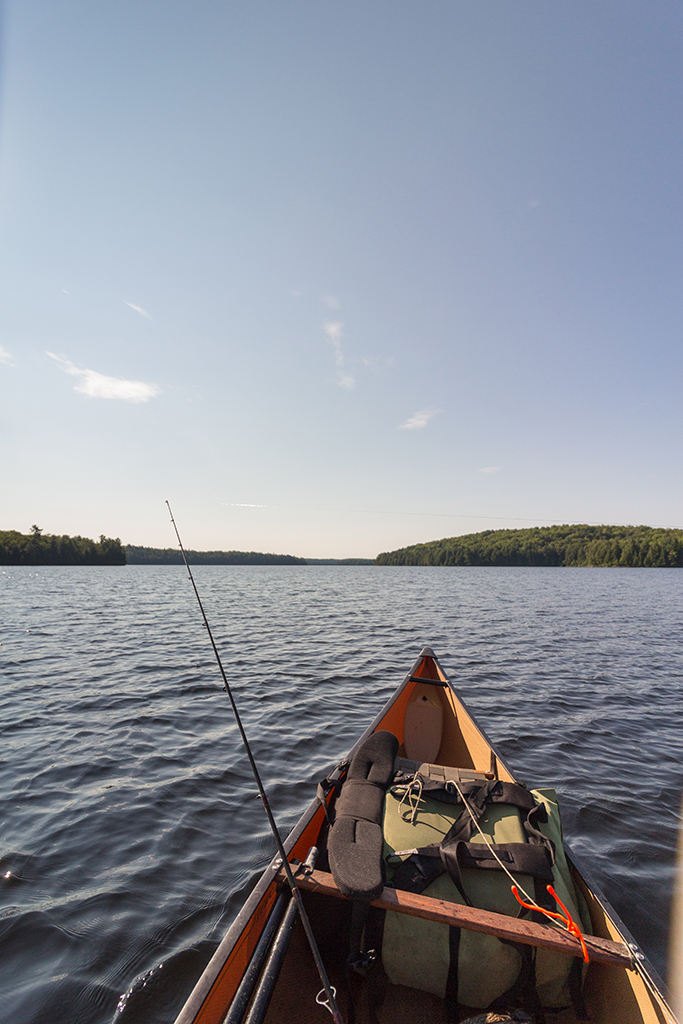 The 550m portage into North Sylvia Lake started with another steady incline, which  became the norm for the rest of the trails today. I single carried it in just over 10 minutes.

I don’t remember anything about North Sylvia Lake aside from a family of loons that were playing in the middle of the lake. It was amazing to watch them as they splashed around in the lake together. I think I counted 8 of them in total. I sat in my canoe for a good 30 minutes watching them. 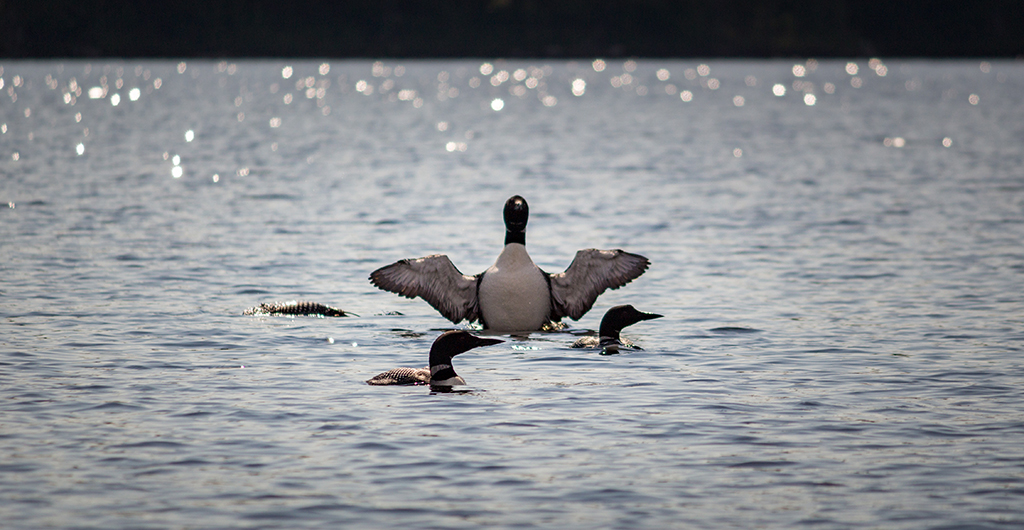 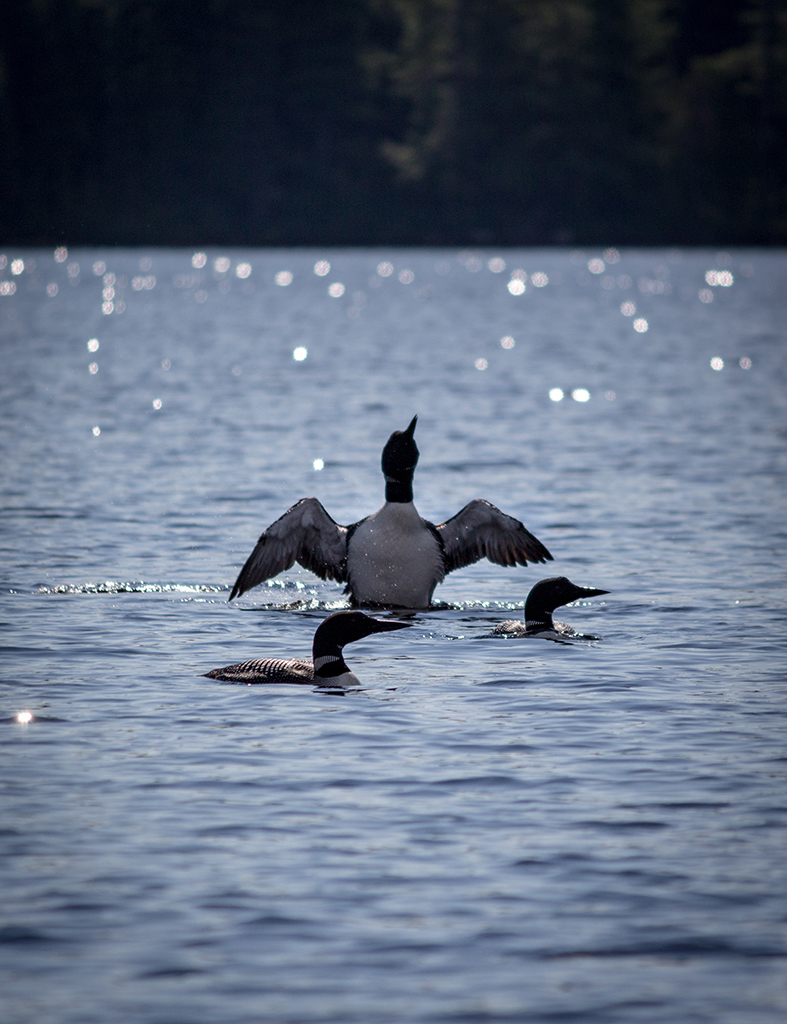 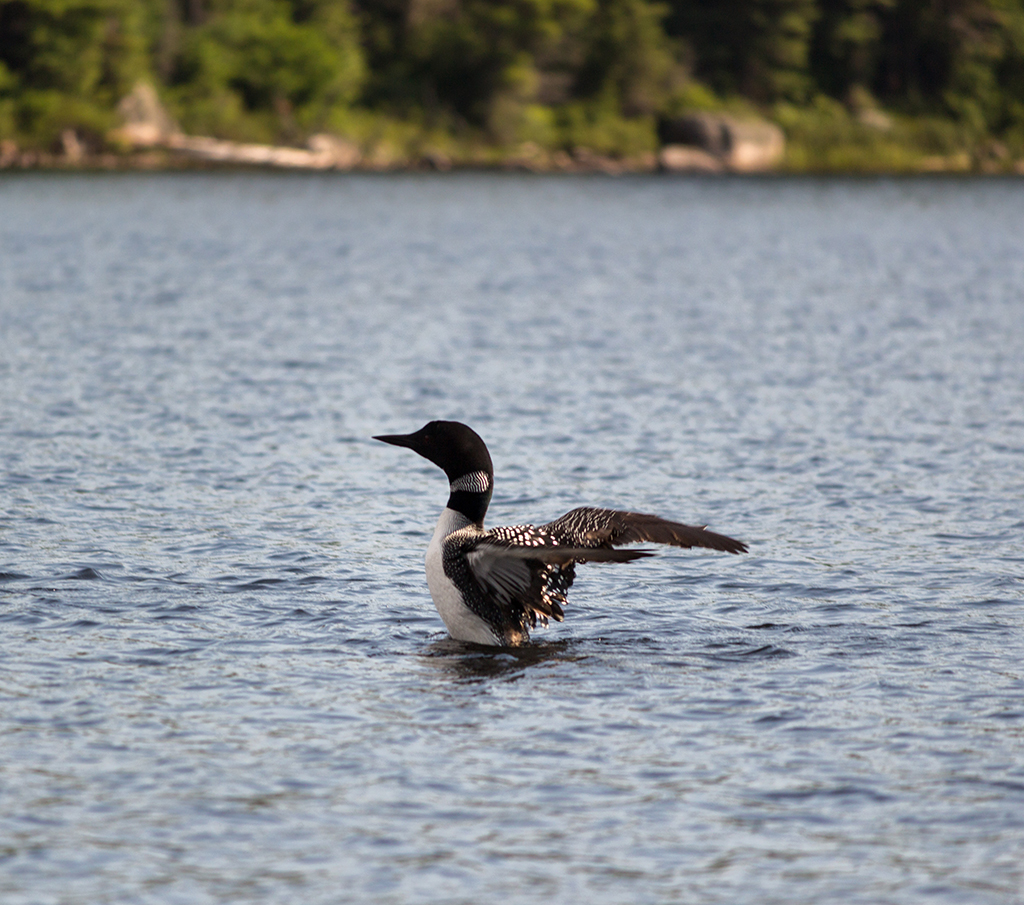 After watching the loons I made my way towards the 660m portage into Boggy Lake. Again this trail started with an incline but leveled out approx. half way through for the rest of the way. Boggy lake wasn’t all that exciting so I didn’t even bother pulling out the camera. 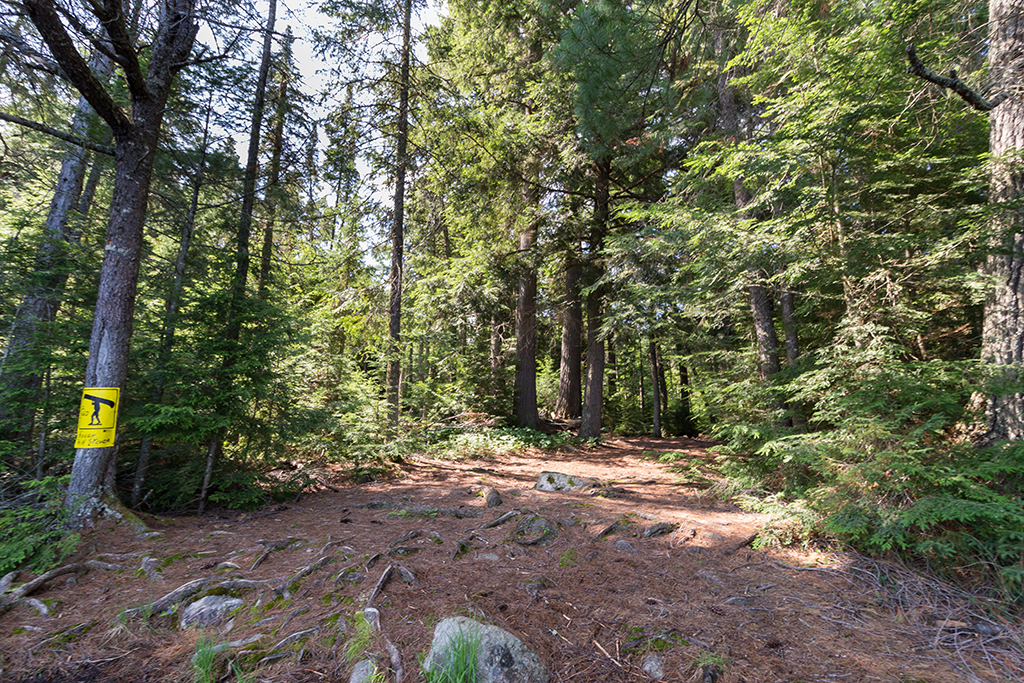 Next came the 1490m portage from Boggy Lake to Dahinda Lake. The only thing I remember about this trail is.. well you guessed it.. another steady incline to get your heart rate up for the rest of the trail. Another thing I noticed here was the bugs were absolutely terrible! They weren’t bugging me as much as Athena, she was not a happy pup! I single carried the first half, but I was getting very tired so I decided I would take two trips for the rest. I arrived on Dahinda Lake at around 1PM.

Dahinda Lake was similar to Boggy Lake, essentially that’s all it was.. a large bog. I had trouble finding the narrow channel into Ratrap Lake, but once I found it it was a quick and easy passage.

I’ve always been curious about the campsite on Ratrap Lake so I paddled close to the Island as I made my way across. The site looked decent, but far from spectacular. I would definitely stay here in a pinch with no complaints, though.

I was very happy when I approached the final, and smallest portage of the day.. a short 390m into Maple Lake. I was very tired at this point and couldn’t wait to get it over with. I single carried this trail in under 10 minutes. 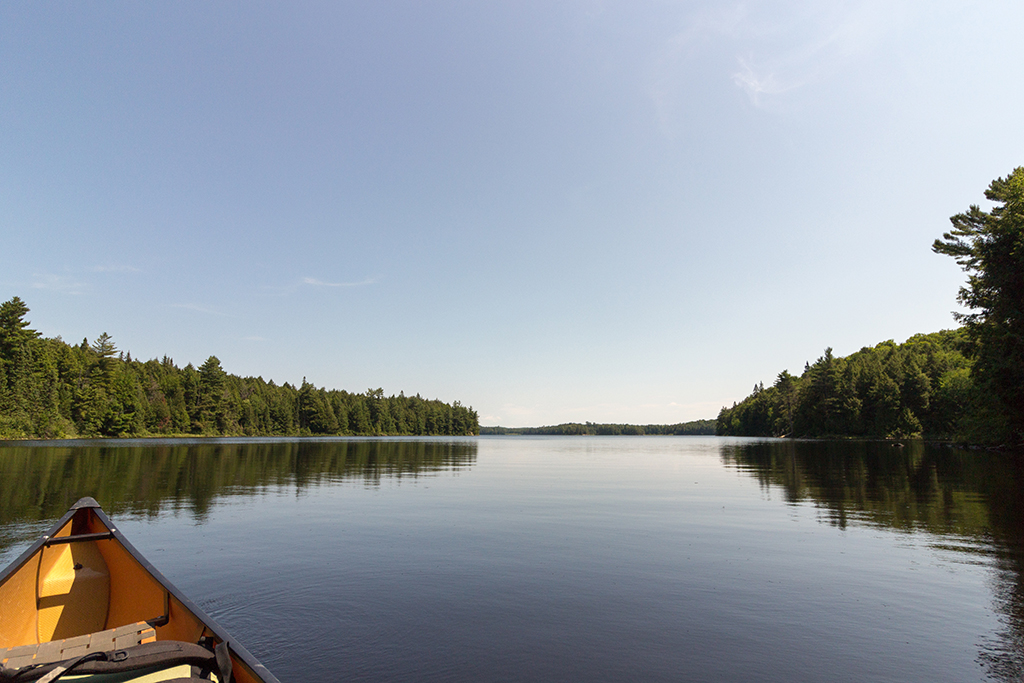 Just after arriving on Maple Lake I noticed Athenas eyes and face were starting to swell up considerably. She must have had a reaction to the deer and stable flies on the Boggy to Dahinda Lake portage. Half of a Benedryl capsule was on order for her as soon as we reached camp..

I had been to Maple Lake in the past, but never ventured into the Southern section of the lake. I had only previously camped on the Island near the Maple Creek portage. I had read online that the two Southern most Island campsites were amazing, but for some reason I wasn’t overly impressed with either as I paddled by. I kept going for the other island to the North-East. The campsite here has a massive staircase from the landing area up to the actual site itself. Again I wasn’t overly impressed with this spot but I was too tired to explore any further, so I setup my hammock and gave Athena a Benedryl. At this point she could hardly open her eyes! I felt very bad for her so I let her nap in the hammock for a good hour while the medication worked its magic. 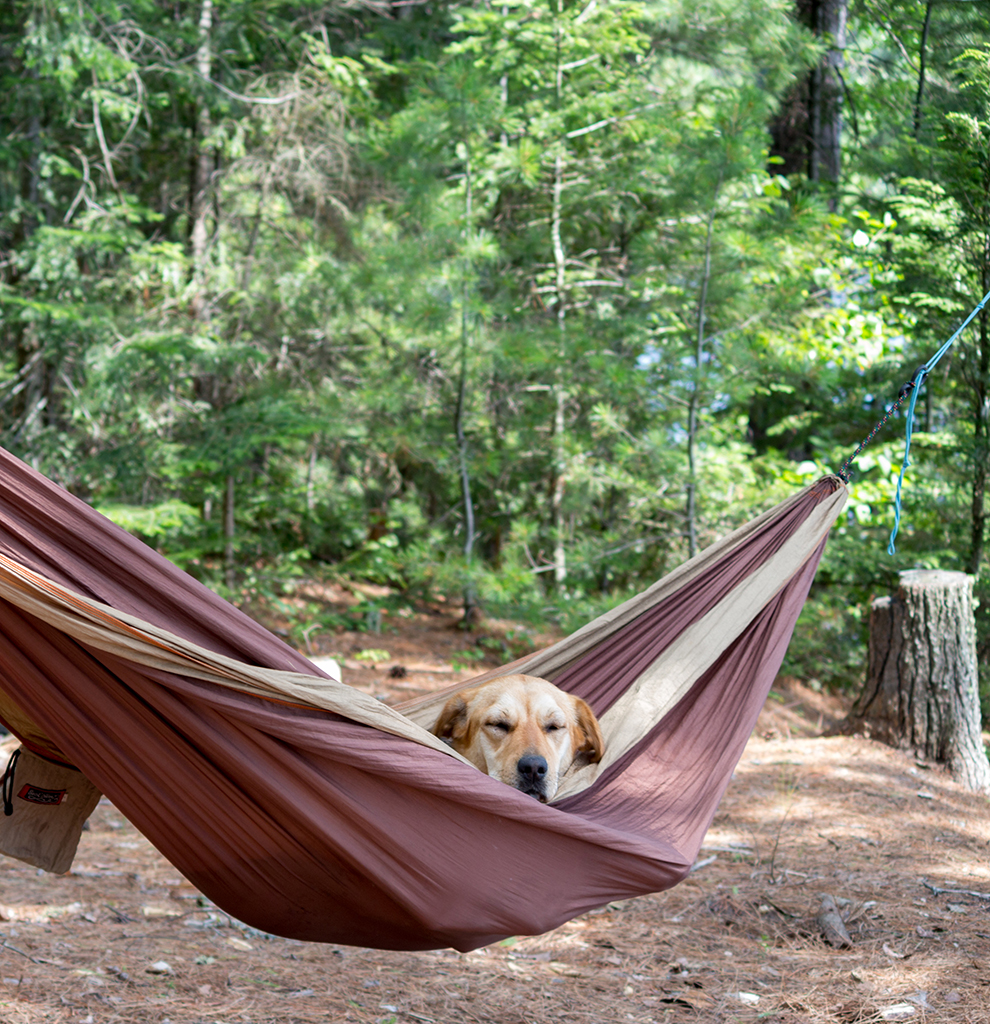 Poor Athena resting in the hammock.. She couldn’t open her eyes any wider than this

When she woke up the swelling was almost completely gone which I was thankful for (I think she was too). I decided I actually preferred the other sites I had checked out earlier over this one so I packed the hammock back up and made my way back across Maple Lake. I ended up snagging the Southern Most Island site. It was very exposed and as a result I got a healthy dosage of vitamin D this afternoon. I spent the rest of the afternoon lounging around drinking Tang mixed with a bit of vodka which was very refreshing.

Supper tonight was hamburger helper with dehydrated ground beef, onions, and mushrooms. I also made bannock to go along with it. For some reason I found this meal rather salty and I actually had a hard time getting it down.

I finished eating around 7PM and finished my camp chores (dishes and firewood) shortly there-after. At around 8 Athena asked me to go to bed so I let her in the tent for the night, and I lazed around in my hammock drinking a cup of whisky.

A pleasant way to spend a beautiful evening

I took a few more photos while watching the sunset, then retired to the tent as soon as the ‘golden hour’ was over once again. I had a very short day ahead of me tomorrow, so I didn’t bother setting an alarm. The last thing I remember before drifting off to sleep was listening to a owl hooting off in the distance.. it doesn’t get much better than that!.. 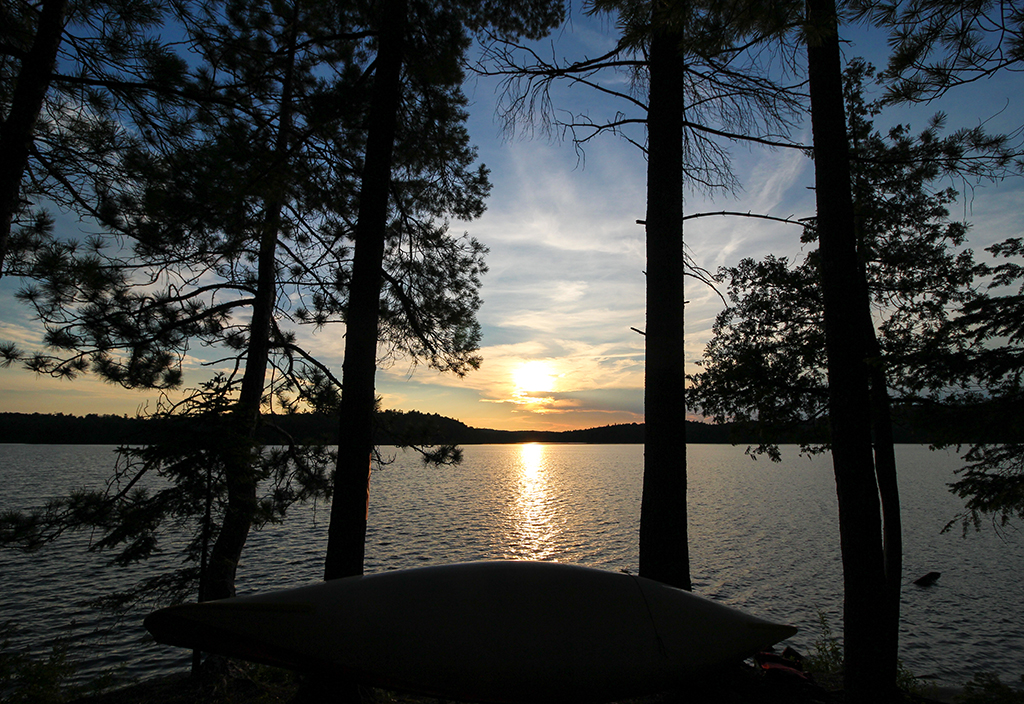