I didn’t wake up as early this morning as I normally would (usually I’m up when the sun comes up). I think that is mostly due to the amount of portaging and paddling I did the day before. That’s okay though, because today was going to be a very easy day, I only had to paddle 4 or so KM to get to my next campsite on Harry’s Lake.. no portaging necessary today!

I was out of the tent and had coffee on the go at around 7:30AM. While my Kelly Kettle is heating up and then while my coffee cools I normally take down my tent/tarp (as long as it’s not raining) that way as soon as I finish my coffee and oatmeal I can get on the water. I have always preferred to get on the water as early as possible and arrive at camp a bit earlier than most. This way I can collect firewood and setup a good campsite and not have to worry about the time! And besides early morning is usually the best time for fishing anyways! 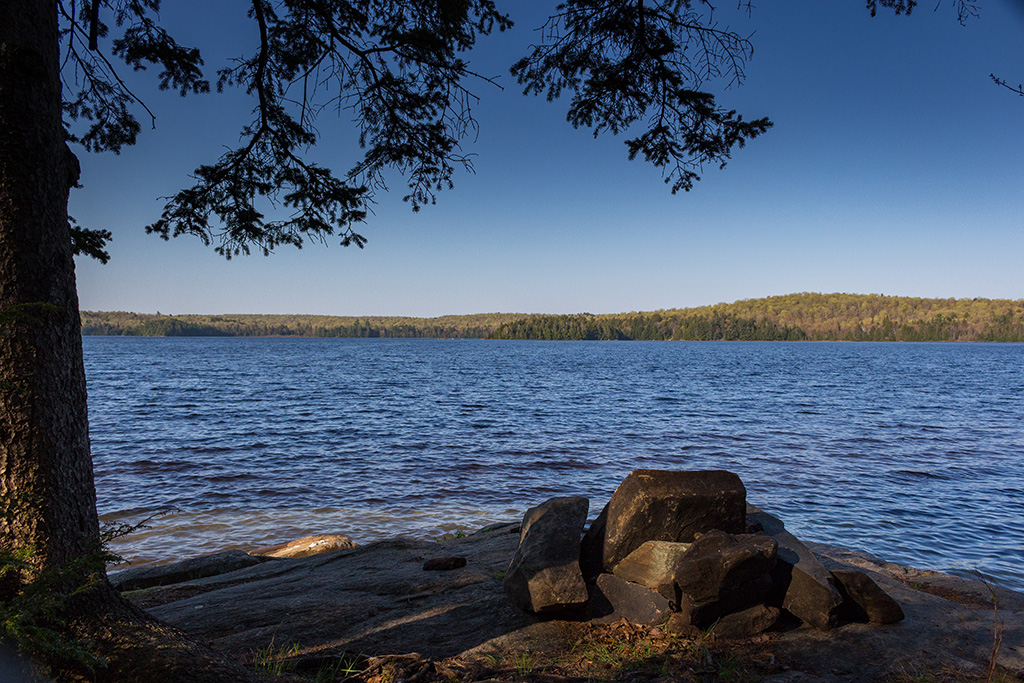 I relaxed and drank my coffee on this surprisingly comfortable stone chair out on the rocky point of the campsite I was at on Welcome Lake.

All ready to go once I’m done my cup of Java!

For anyone curious what campsites I stayed on for the first two nights here they are on Jeff’s Map:

I got on the water close to 9AM, and trolled across Welcome Lake again without any luck. 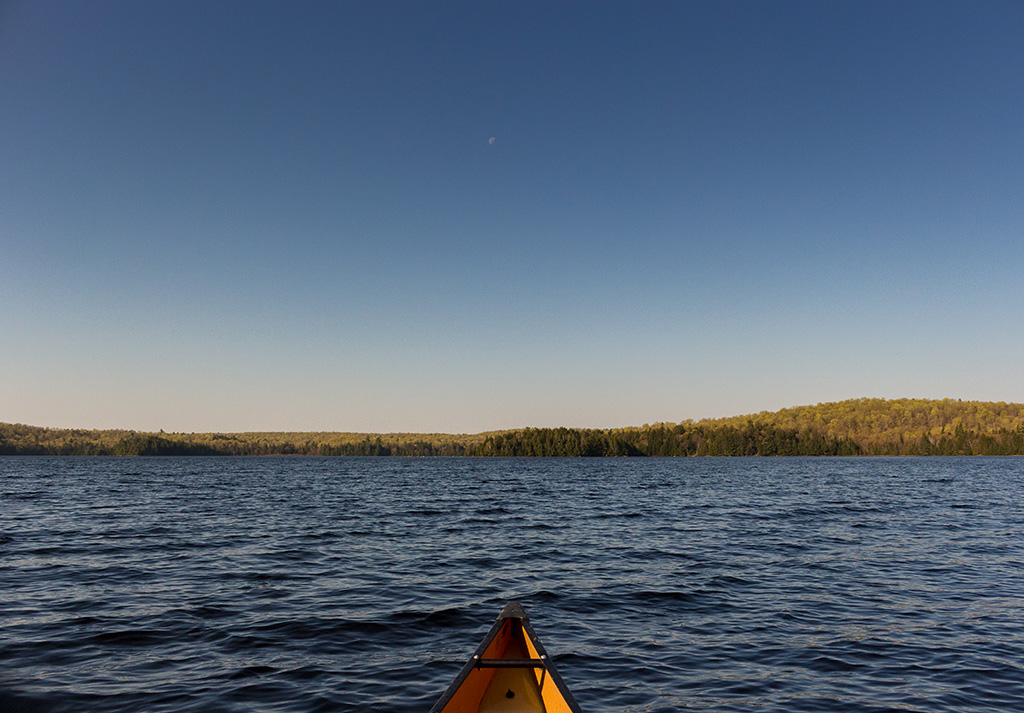 Looking across Welcome Lake on my way to the river going into Harry’s Lake.

I was really hoping to see moose going through this small, shallow river into Harry’s Lake. I even made sure to switch to my telephoto lens so I could get some shots as fast as possible if I do come across any wildlife.. but unfortunately I saw nothing! The current in places was a little bit hard to fight with, but again it was manageable. There were a couple of beaver dams but the water was high enough to allow me to float right over them!

The wind started to pick up as I hit Harry’s Lake so I decided to stop at the first campsite on the lake for a little break and to snack on some beef jerky. This campsite isn’t the best I’ve ever come across that’s for sure, but it had a great beach and a super nice view. 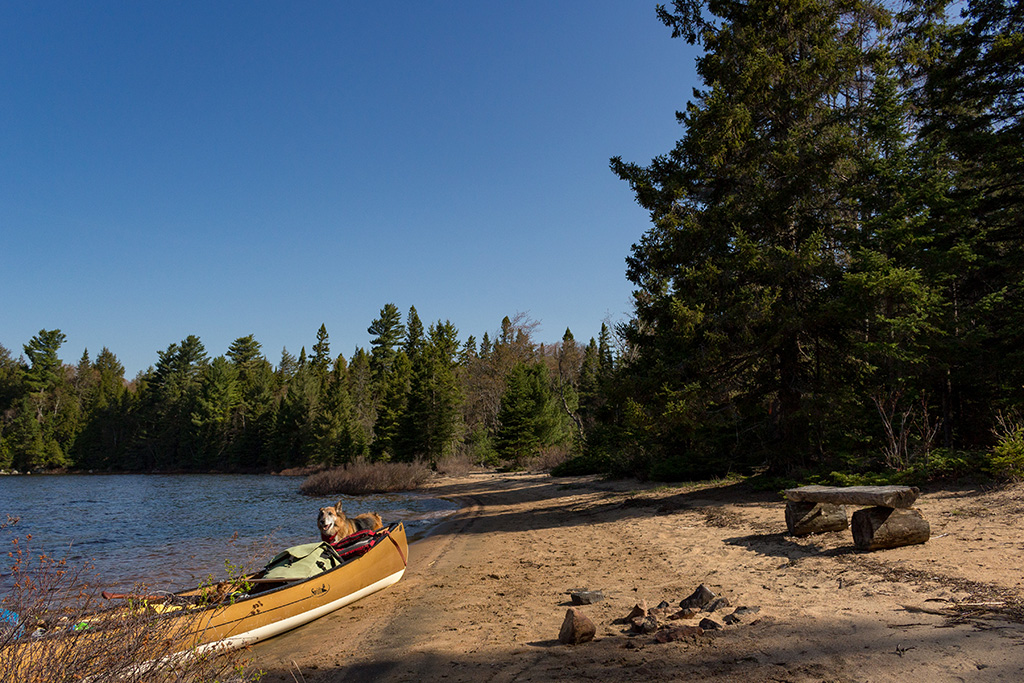 Beach campsite right as you enter Harry’s Lake on the East Side.

Looking across Harry’s Lake from the East side beach site.

Paddling across the lake was a bit challenging and took longer than expected. By the time I got to camp there were whitecaps rolling across the lake. I didn’t fish along the way so I could concentrate more on my paddling. I had seen pictures of the campsite on the North-West point on the lake and it looked pretty impressive but unfortunately it was occupied. No big deal though, as I scored an awesome site for the night, and mine was more sheltered from the high winds anyways.

I didn’t do much on this day other than lounge around in my hammock reading, and eating more of my food than I probably should have. In the evening the people camped across the lake were out fishing from their canoe, shortly after sunset I could hear them cheering from across the lake so I’m assuming they landed a trout… I was a bit jealous but I knew I’d probably catch some on Louisa (more on that later ;-))

The sunset was pretty impressive for the second night in a row, I love watching the sky slowly change colors! I went to bed fairly early again on this night, probably around 10. I used my InReach to get a weather forecast for the next day, looks like I’ll be dealing with high winds and a thunderstorm. Because of this I wanted to get an early start, so I told myself I need to get up at sunrise the next morning… 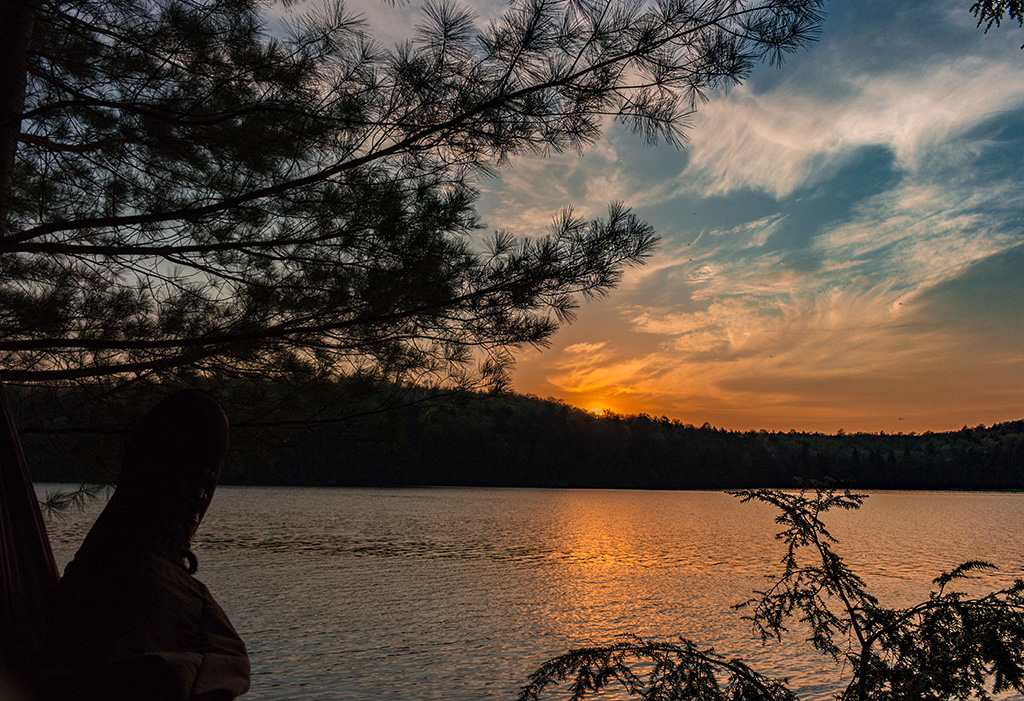 Sitting in my hammock watching the sunset