…As per usual I was awake  at approximately 3AM with the sudden urge to urinate. When I got out of the tent to take a leak I noticed that it was still very warm out, as a matter of fact I slept in my underwear on top of my sleeping bag the whole night and was still borderline uncomfortably warm. As I fell back asleep I told myself that I need to get up as it gets light out this morning.

I had no alarm of any sort, but I’m typically a morning riser and had no issues waking up at 5AM. Just like the previous two mornings I started a fire in my Kelly Kettle and as it reached a boil I packed away my sleeping bag, extra clothes, sleeping pad, etc.. Then while my coffee cooled I packed up my tent. I skipped breakfast this morning which isn’t uncommon for me.

I got on the water just before 6, just in time to watch the sun rise above the horizon! 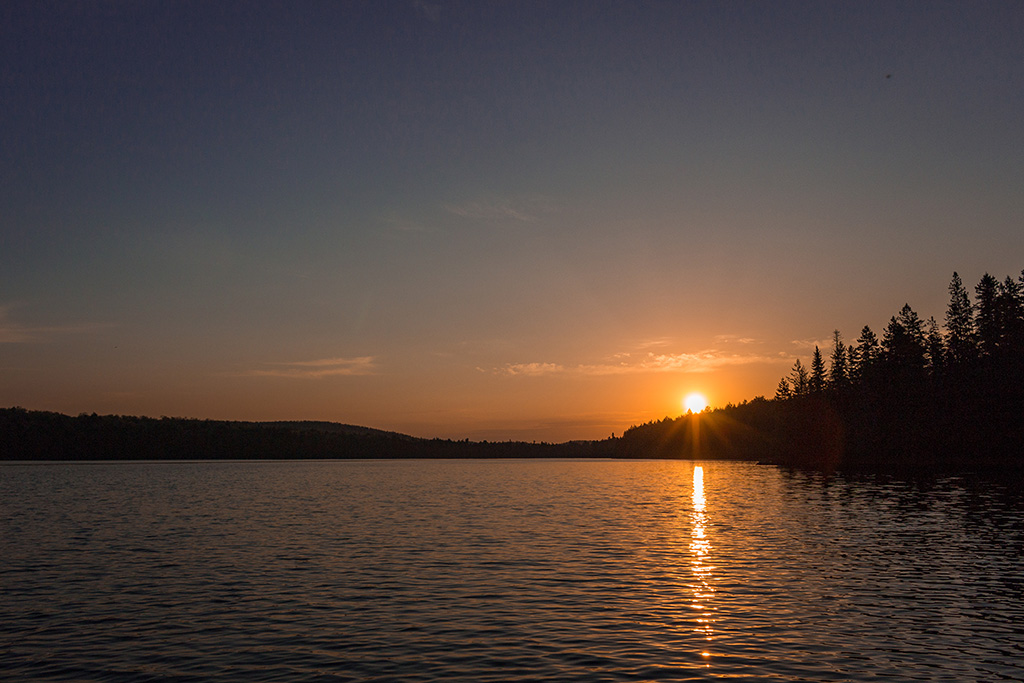 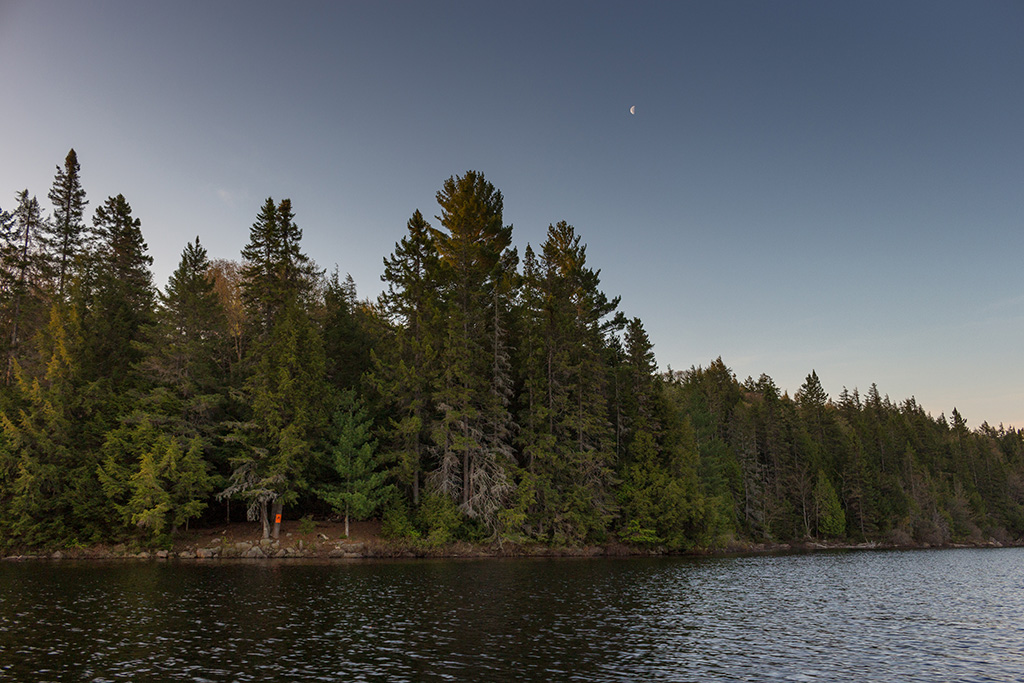 One last look at last night’s campsite on Harry’s Lake. The moon was a nice touch!

The short paddle across the rest of Harry’s didn’t take long. The river going into Rence Lake was very similar to the one between Welcome and Harry’s.. a decent current but nothing serious. I think there may have been another beaver dam or two in this section that I floated over with ease. Again I was hoping to see some moose in here, but again I got skunked!

Along the river between Harry and Rence Lakes

Although I didn’t see much of Rence Lake it looked like a beauty! When I reserved my trip Rence was already all booked up but when I went through both sites looked vacant. Both reservations must have either been no shows or they didn’t make it as far as intended.

To reach Frank’s lake you have to paddle through a marshy section on the North-East side of Rence. There is little to no current here and its a very nice paddle. Again it looks like prime moose habitat for this time of year, but I seen nothing!

Paddling through the wetlands towards the P320 into Frank’s Lake. That small yellow speck is the portage sign.

The P320 into Frank’s lake has a bit of an elevation gain in the middle of the trail, but nothing more than a slight inconvenience. I made quick work of this portage and was paddling on Frank’s Lake by 7:10AM.

Frank’s Lake has one lonely campsite on it. It looks like a pretty good site, but I’d imagine it would be very buggy this time of year! Apparently the fishing is good here, but I didn’t catch anything as I trolled across the lake. 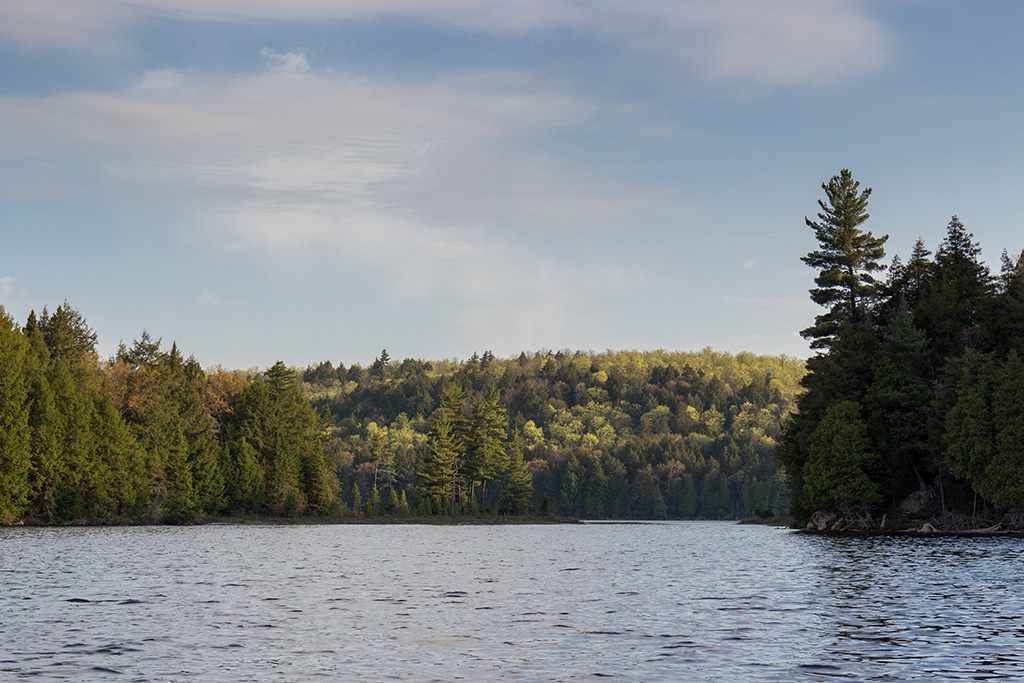 Looking through the narrows to Florence Lake. This was a beauty paddle!!!

I reached the P1725 into Lake Louisa by 7:30. I decided to relax here at the take-out for a few minutes to take in all the marvelous scenery. I love this area! 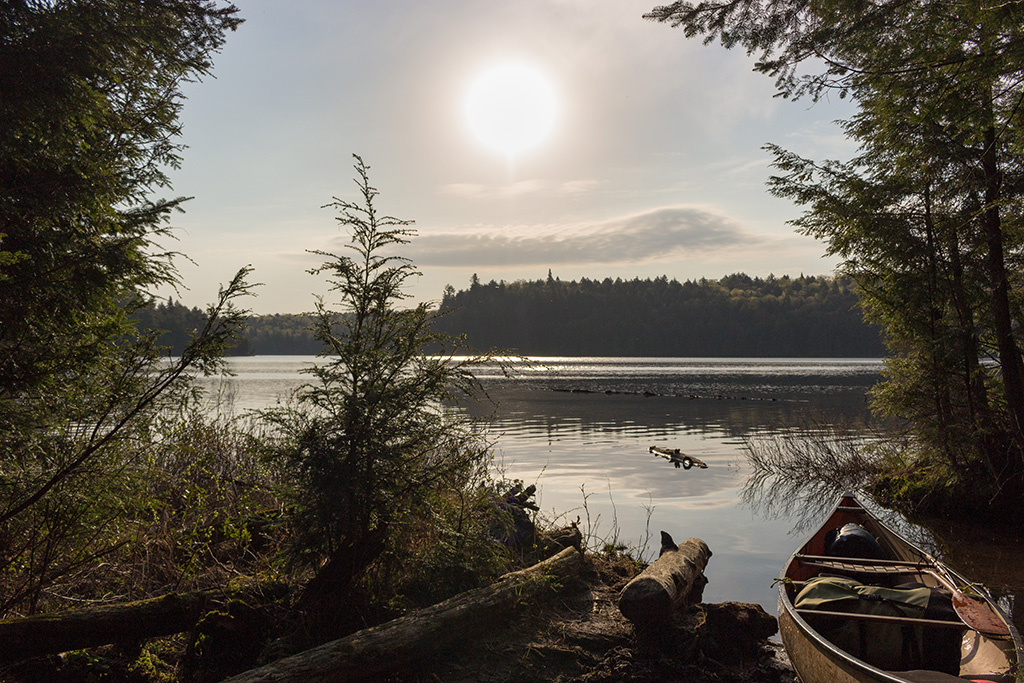 Getting ready to start the P1725 to Lake Louisa.

I wasn’t sure what to expect on this portage. The only thing I knew is it crossed a logging road a couple hundred meters in. 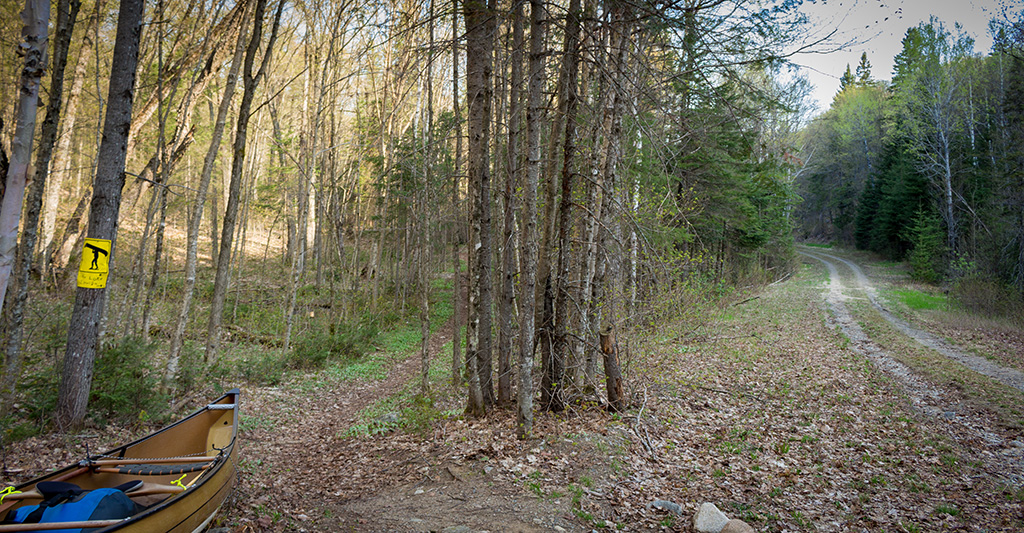 Crossing the logging road on the P1725

Thankfully this was a very easy walk in the park! It seemed like most of the portage followed a very old grown-in road, but it would have been so old it was hard to tell for sure. A few hundred meters down the trail from where my canoe sits in the photo there was some mud with bear tracks in it, but I didn’t stop to take any photos. There were a few small climbs, but nothing major. It took me exactly 70 minutes to do a double carry.

At the end of the portage there is a steep hill going down to the Lake Louisa put in. Here I met up with two older gentlemen who were camped on Louisa but were doing a day trip into Florence and Frank for trout fishing. We chatted for at least 20 minutes. The guy carrying their canoe was 64 years young and does all these long portages in one carry without a single break! I hope I’ll still be able to do that when I’m that age! I wished them luck and we went on our separate ways. 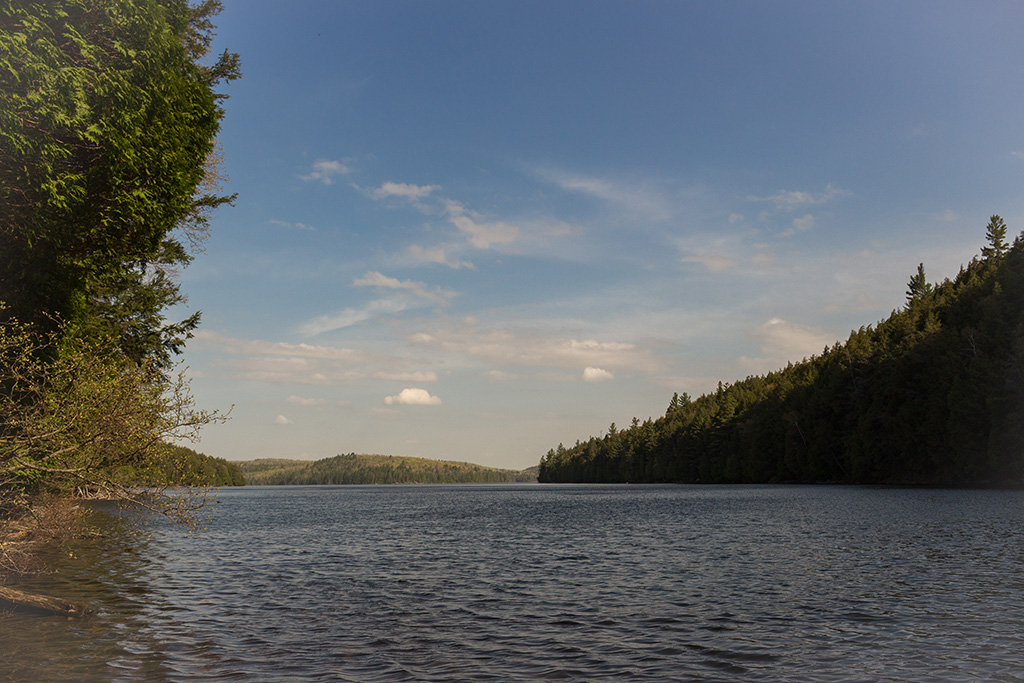 I took another small break before hopping in the canoe and starting my journey across Louisa. I got on the water shortly after 9 and I was happy I arrived at my destination early. 10 or so minutes into my paddle the wind really started to pick up from the South-West. Luckily for me I didn’t have too far to go, I was hoping to snag the site on the Eastern Point right as you enter the main part of the lake. A friend of mine told me about this site and how good the fishing is here from shore. The water is up to 120ft deep within casting distance of shore, which is great for trout fishing when the water is warm, but not so important this time of year. 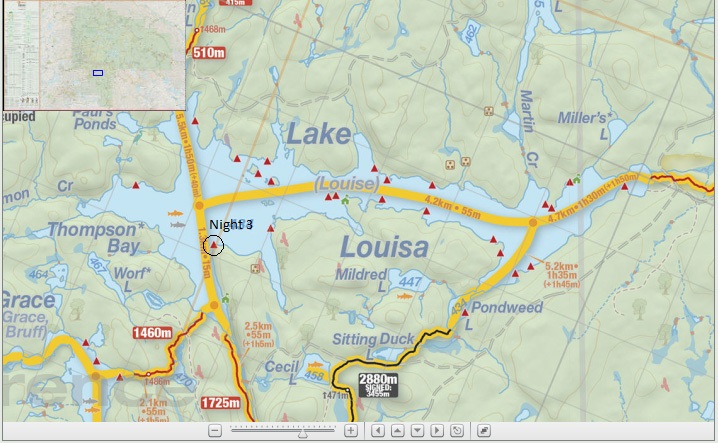 My home for the night on Louisa

Luckily the site was available, which I was pretty happy about because now there were white-caps rolling across the lake. While I got my camp established I decided it wouldn’t hurt to throw my line in the water. All I used was a single hook with half a worm, a couple of sinkers and a bobber. I didn’t even get a single bite in a few hours, I was surprised my worm lasted that long! My expectations weren’t very high anyways considering the time of day and the weather.

Again I spent quite a bit of time lazing around in my hammock reading and eating. It was a very hot and sunny day. According to the thermometer built into the whistle on my life jacket it was around 29 degrees Celsius… without the humid-ex. The lake water here was still ice cold (I’m assuming because of the extreme depths of the lake) so I took this opportunity to have some Tang mixed with Vodka. Normally I don’t bring juice powders because I can’t stand the taste of artificial sweeteners, but I found Tang recently at the grocery store and it contains real sugar. Obviously you pay for that with the weight but it was worth it! It sure went down good under the hot sun! I applied sunscreen 3 times today, and still felt like I was burning to a crisp, but luckily I didn’t.

My new tent for this season. After lots of research I decided to purchase a “NatureHike Cloud II”. I found this tent on Amazon for $150 CDN. Its an exact replica of a $300+ Big Agnes Tent. According to the reviews the build quality is almost identical between the two. I’ve used it for 11 nights so far, and I absolutely love it! For more info on this tent send me a message.

Somewhere around 4PM the wind started howling even more, and the sky was rapidly getting darker and looking much more ominous. Luckily the two guys that were day tripping into Florence/Frank’s just got back to their camp across the lake. 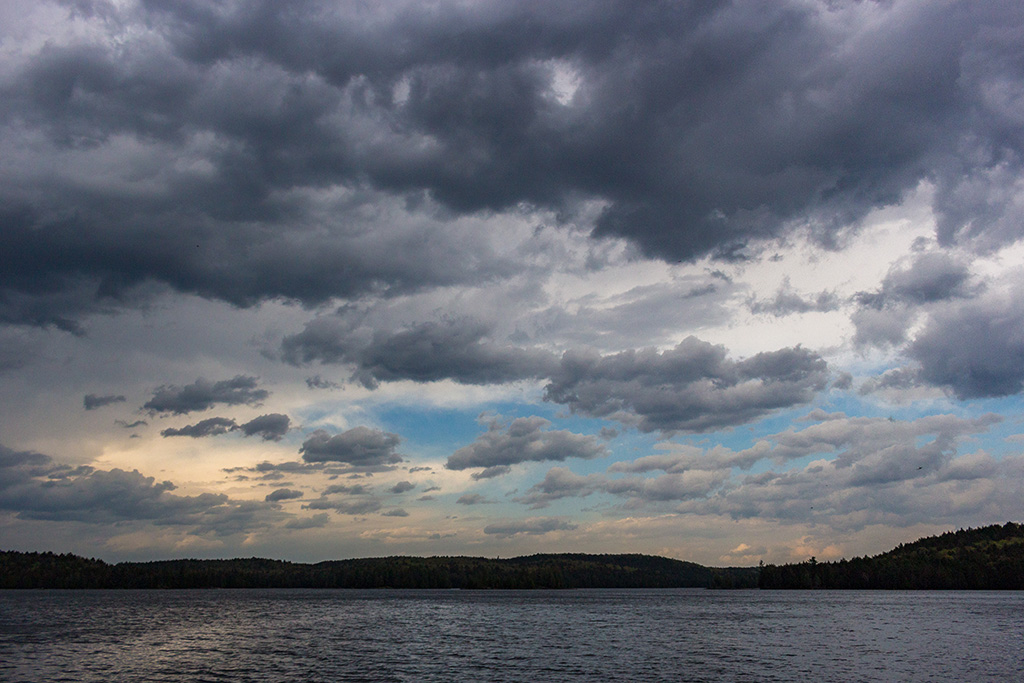 There’s definitely a storm brewing up there!

I started hearing thunder in the distance so I figured now would be a good time to setup my kitchen underneath my tarp and get supper on the go. Not long after I fired up my MSR Dragonfly stove the rain started. It started off light but soon started coming down in literal sheets blowing sideways in the extreme winds! This would be the ultimate test for my new tent. I’ve used it during two nights of rain so far, but nothing like this! There was lots of thunder but I didn’t see any lightning at all. All in all this lasted about an hour and a half. 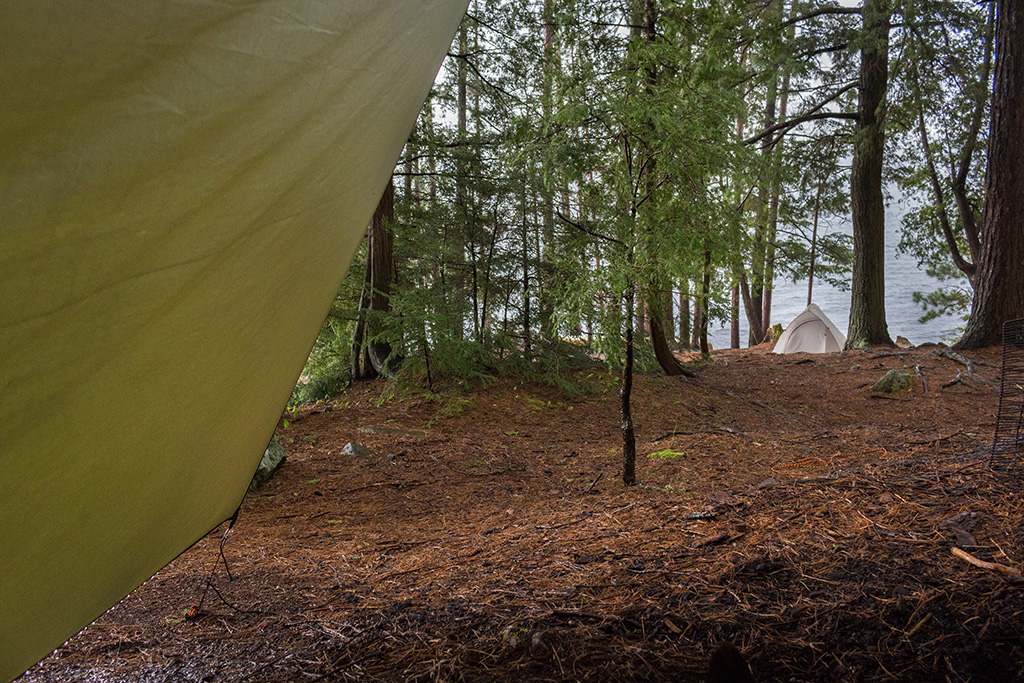 Cooking supper under the tarp, waiting for the storm to pass.

When the rain finally let off the sky cleared up again rather quickly. The temperature was now only 12 degrees according to my thermometer. I went and checked the inside of my tent and thankfully not a single drop of water made it inside! I hope the material continues to stay this waterproof through the test of time!

By the time I got my various camp chores done (dishes, collecting a bit of firewood, etc.) I was greeted with another great sunset. As I watched the sun disappear I threw my line in the water. I was casting and retrieving a Mepp’s Aglia but had no luck, which again didn’t surprise me because those intense winds stirred the lake up pretty good. 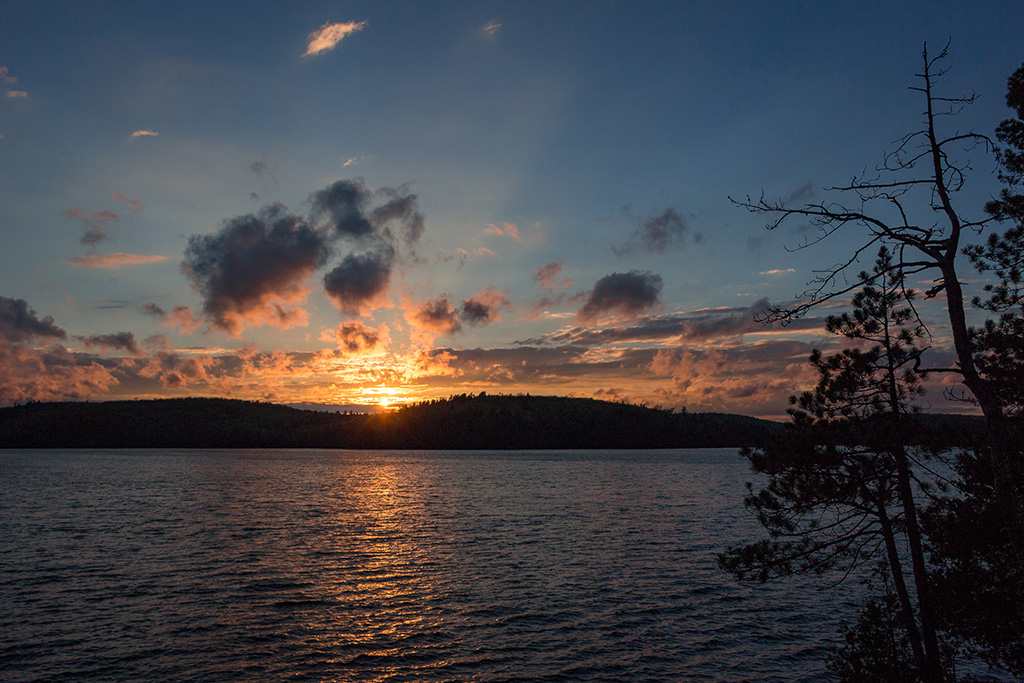 As soon as all the light was gone (approx. 10PM) I went to bed. Tonight was very cold and windy. I woke up multiple times in the night from either the sound of the wind howling through the trees or because I was shivering in my -7 sleeping bag. The wind had shifted and was now coming from the North and boy was it ever cold!…